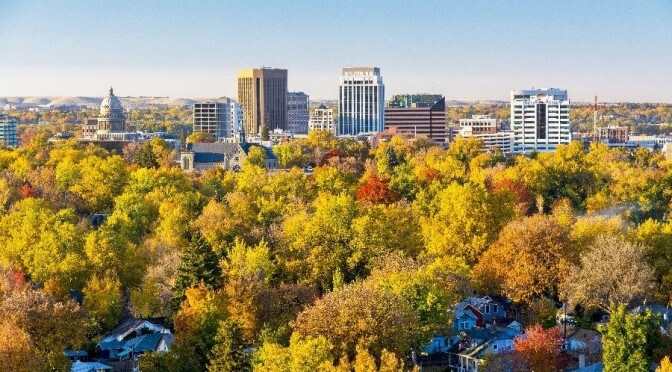 Boise, Idaho: land of the potato, rightfully obsessed with their BSU Broncos, and the place Central Self Storage calls home to one of our fine storage facilities. But that’s not all there is to the capital (and largest) city in Idaho.

We all know about the Gold Rush and Smurf Turfs, but Boise has another side to it that new residents need to know. So we’ve put together a Boise Survival Guide that shares some not-so-well-known facts about this gem of the state, as well as places you need to dine or visit before holding a conversation with anyone around you. Feel free to add to this list!

We Lay Claim to Aaron Paul

Sure, there’s Bill Buckner, Paul Revere (the musician) and a slew of athletes, actors, inventors, writers and more. But Aaron Paul is a hero with his own holiday in Boise; since 2013, October 1st has been the official Aaron Paul Sturtevant Day.

Everyone will know you’re an outsider if you walk around calling it “Boy-zee.” To be accepted as one of us, you must pronounce it “Boy-see.” And no, it’s not po-tay-toe, po-tah-toe.

We’re Used to Being Active

Named a top Adventureland city, a top biking city, and within the state that boasts the most rivers, you’re going to be outside. A lot. If you don’t already have one, you’ll need the following: mountain bike, kayak (a stand-up paddle board is acceptable), fishing gear – and the ability to successfully use all.

Payette Brewing Co., Albertson’s and eaten their chocolate chip cookie, Sockeye, Asiago’s, a Bronco’s game, Bleubird’s, or to the Boise River for stand-up paddle boarding. There’s a lot more we’d look at you weird for, but you’d already know what they are if you were from here.

We all Know the South End is For College Students

If you like that kind of lifestyle, great! But if you’re looking for something more family oriented, Bronco’s turf is not your first choice. But they have some pretty amazing nightlife, if you’re into that. Head to the North End instead, if you can afford that.

We Have Yarn Bombers

Some people have photo bombers, some have streakers. We have yarn bombers, people who, overnight, will turn objects throughout the downtown district into beautiful works of yarn art. Don’t judge.

We Need You to Learn the Rules of the Road, Stat

When it comes to open range livestock, they have the right of way – always. If they wander out into the road and you hit them, you pay for the whole cow. So figure out what roads they frequent, and stay off your phone.

When you move to Boise, Idaho, it really doesn’t take long for you to figure out that it really is “Est Perpetua” – that it’s forever. You’ll crave more of this city as manically as you do French fries, or mashed potatoes, or baked potatoes, or anything made with them.

And Central Self Storage is proud to be a part of helping Boise continue to grow, by offering those moving or expanding a place to put their things while they transition. From business owners to homeowners, we’re proud to help you with any of your storage needs!